Fall Steelheading started for me just before and right after my Missouri Deer bow season hunt. It's one of my few vacations. I leave in late October and got back on Nov. 11th..The fishing has been decent. I had a trip on Nov. 13th. for a half day and this weekend ( 19, 20 th.) we did 2 half days with a lunch because of the cold winter like weather. We got about 2 -3" of snow in places..The wind was brutal on Saturday.. but we toughed it out till 1:30 both days. We caught fish 2 to 4 Steelhead each trip out and had pretty good action considering it's low and clear water conditions. I guess that has been the norm this Fall, bad conditions.

The hunting was warm and windy so I didn't have ideal conditions for that either. You want it frosty cold and quiet light winds to kick in the rut and Deer movement is good when it's cold. When it's 75 to 85 deg. they move mostly at night like in the summer. Lots of days it was that warm with a 20 to 35 mph winds also kept them bedded down more than normal...So it was kinda a tough hunt. Several days were good conditions but the rut had been put on hold and behind schedule with all the warm weather. A few Deer were in heat but they were more nocturnal than I have ever experienced.

My Bow hunt was decent. I shot a Doe and had to skin and quarter it out and then ice it in a cooler because the Deer processors in Mo. don't work Sunday's and it was to hot to just leave hanging.. I seen tons of scrub buck's and doe's at bow range. The corn field food plots I had my cousin plant were all ate up before I got down there. So this is the second time we tried corn and both hunts were bad mostly because to grow a real corn field you need to hoe it, fertilize it and weed it..In other words it's not just a plant it and watch it grow kinda crop. You need to give it some attention for it to reach 6ft. tall full of corn ears, also need to fence it off from the Deer if your only going to plant 4 or 5 acres of it..So it will be milo or winter wheat from now on..So the Deer have enjoyed there last corn field on my place for a while. Milo doesn't get ripe till I get down there and winter wheat is tender vittles when it is young sprouts in October thru December. So those both work well to attract Deer to the property.

My little cousin Morgan shot a nice young 8pt during the youth season with a rifle. Reggie shot a nice 145" 8pt. with a crossbow but lost all the meat and hide to coyotes and warm temps when he found it the next day. Joana shot a 120" 9pt. with a crossbow. Dan shot a 110" 8pt. and a coyote with a bow. Dan seen bigger bucks right after he killed the 8pt. and was kicking himself a little..Been there done that. Dave from D&M Heating and Cooling in Baldwin got a buck of a lifetime in Baldwin a 160" with his rifle on the 3 rd. day of the season.... I never laid eyes on a real shooter buck except at night, in pitch dark I seen a few good ones running around. Seemed like they bedded down a hour before light and didn't get up till a hour after dark. Not Playing Fair at all...

Oh well that's hunting !! Sometimes it takes some luck !! Luck I didn't have..Closest I came was on my last a.m. hunt I had a Hot Doe run by at 5 yards, behind her a rutting grunting buck, grunt, grunt, grunt, grunt walked by at 5 yards...Scrub Buck 4 pt...Dam..Bad Luck or No Luck at all for me...It all was coming together PERFECT for a minute I thought..That a.m. I could have shot the doe and 3 other scrub bucks all at 10 yards or less..Big bucks just were laying low around me..They are just afraid of me rightfully so.. Smart Deer I guess..

If you would like to book a fishing trip I have many good days open and enjoy fishing Half or Full day trips all Fall / Winter for Steelhead and Trout....Give us a call 231-745-6667 I love the late season Steelheading...Dosen't feel like Steelhead season unless it's cold, snowy and icy...So it's time to fish!! 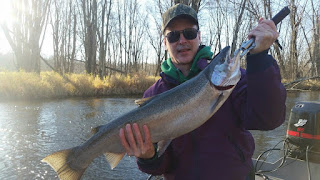 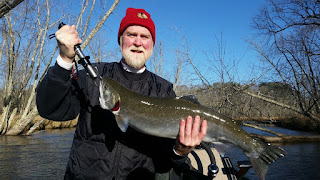 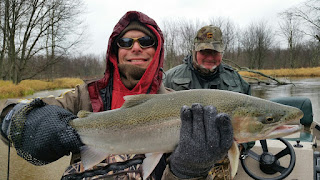 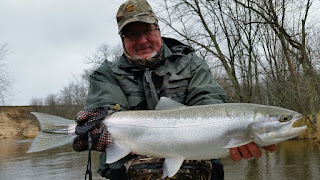 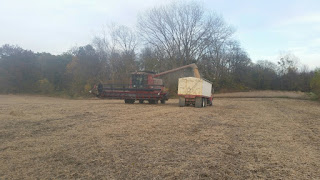 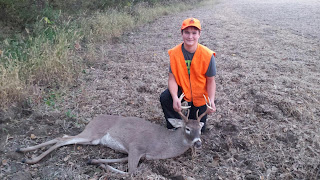 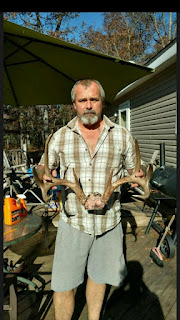 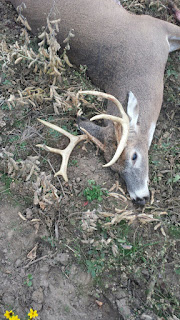 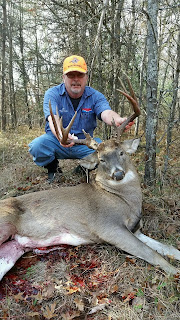 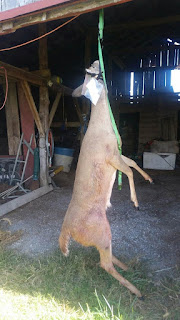 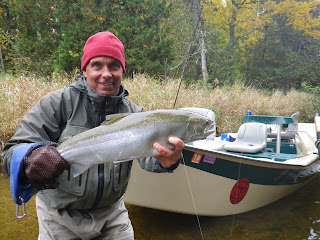