As many of you may know the night fishing Trout program is in full swing. The Hex Hatch has been going for the last week pretty good. It should keep going for about another week or so. Night fishing is your best opportunity to catch trophy Trout in the summer, all summer long. Here's the catch you have to be able to cast large dry flies or mice patterns in the dark with consistency and accuracy. Daytime fishing for Trout is good as well. Use Nymphing as your main tool and you should catch some Trout. If you want to dry fly fish during the day use stimulator's and terrestrials ( Stones, Hex, Hoppers, Ants, Rubber Legged Creatures etc.) Larger patterns for larger fish.

My big lake boat is doing well and still has no name. Been buying a few new rods and doing some rigging and getting a program down for all 12 rods. Most days I run 9. Been getting some use out of it. It's ready for my first oil change with 50 hours on it and all of last years gas long gone. This weeks project, boat maintenance and getting a lettering guy hired..Big Lake Fishing has been going good. Lots of pups/ guppy's around this year. About 4-8 pups a trip out. The only way to keep the guppy's off is to run mag. size spoons and run meat and flies off spin doctors too.I have done this a couple trips out, tired of those little craps. You think your fishing with 9 lines when 2 or 3 have guppy's your dragging around.

Most of the boxes have been a mixed box with 6 to 12 fish with keepers + the released pups. No huge fish yet biggest I've caught is around 14 lb.- 16 lb...Lots of 4 lb.-10 lb. fish hitting the coffin. Which is fine they are the better eating size anyways. Big fish wise at Captain Chucks leader board 2014 is a 20 lb. King, a 30 lb. Brown Trout out of Ludington this Spring and a 32 lb. Laker caught on Thursday the 26th. after the tournament out of Manistee port.. Big fish in the Budweiser Classic Tournament in Manistee June 20th.-22nd was a 20.8 lb King caught by the Job Site crew. AM winners was Almost Paradise and PRO was Verdict III..Big Laker was 14.85 lb. and big Steelhead was 10.15 lb..I think 38 boats in total. It's never a big tournament kinda a shake down tournament for most guys.

Had a really fun trip on a private lake this past Wednesday the 24th.. I had one guy and it was actually really fun teaching him how to cast a fly rod on a lake. Scott went from A to Z in a few hours. Poppers for Blue Gills and Bass was on the menu. A lake and my yard is the best place to learn to cast a fly rod in my opinion. He learned how to roll cast, forward cast , hook set, strip line to catch fish, then set & strip play fish to hand. Over and over and over, Scott put about 20-25 Gills and Bass to the boat in 5 hours one Blue Gill was 10". One of the best casting secession I've taught in years. A 39" Trophy Pike was also caught by Peter trolling body baits out of a wooden row boat. Plus countless Largemouth Bass were caught on other boats that were out on this trip as well..It was a great outing for all..

I have also done some Carp fishing with Pete Hodgman of GoldenBoneFish.com  up on Travers Bay a few weeks ago. Also joined a friend Chuck Howell over of Saginaw Bay for a day of Walleye fishing a few weeks ago where we caught a 3 man limit. Even got my wife Debi out fishing on the big boat a few times for some Salmon action a couple evenings.On June 10 th. Debi and I also celebrated our 20 year wedding anniversary.. A great start to summer so far..Starting to get hot up here. Yesterday we saw 90 deg. which is pretty hot for Baldwin Mi. 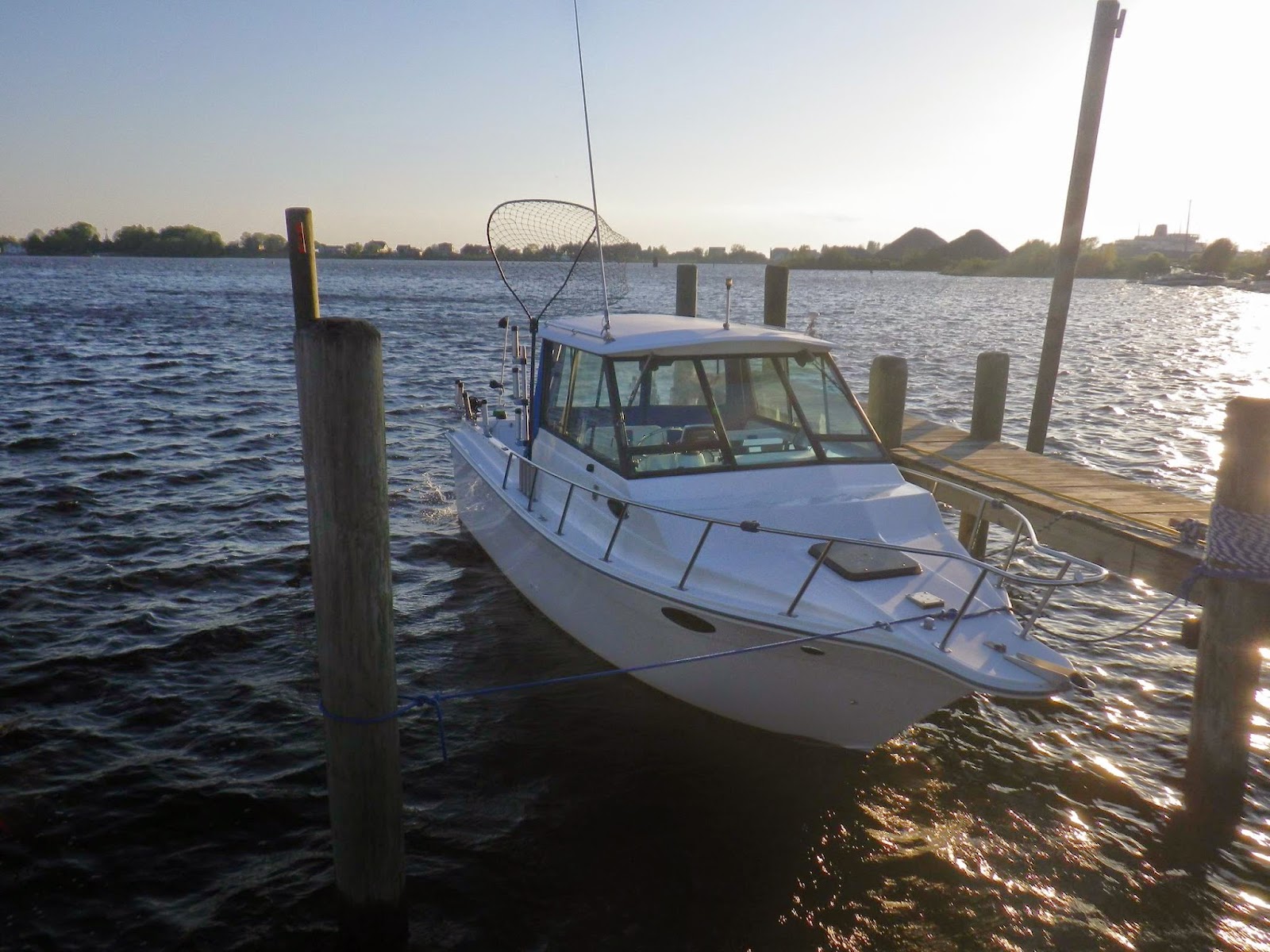 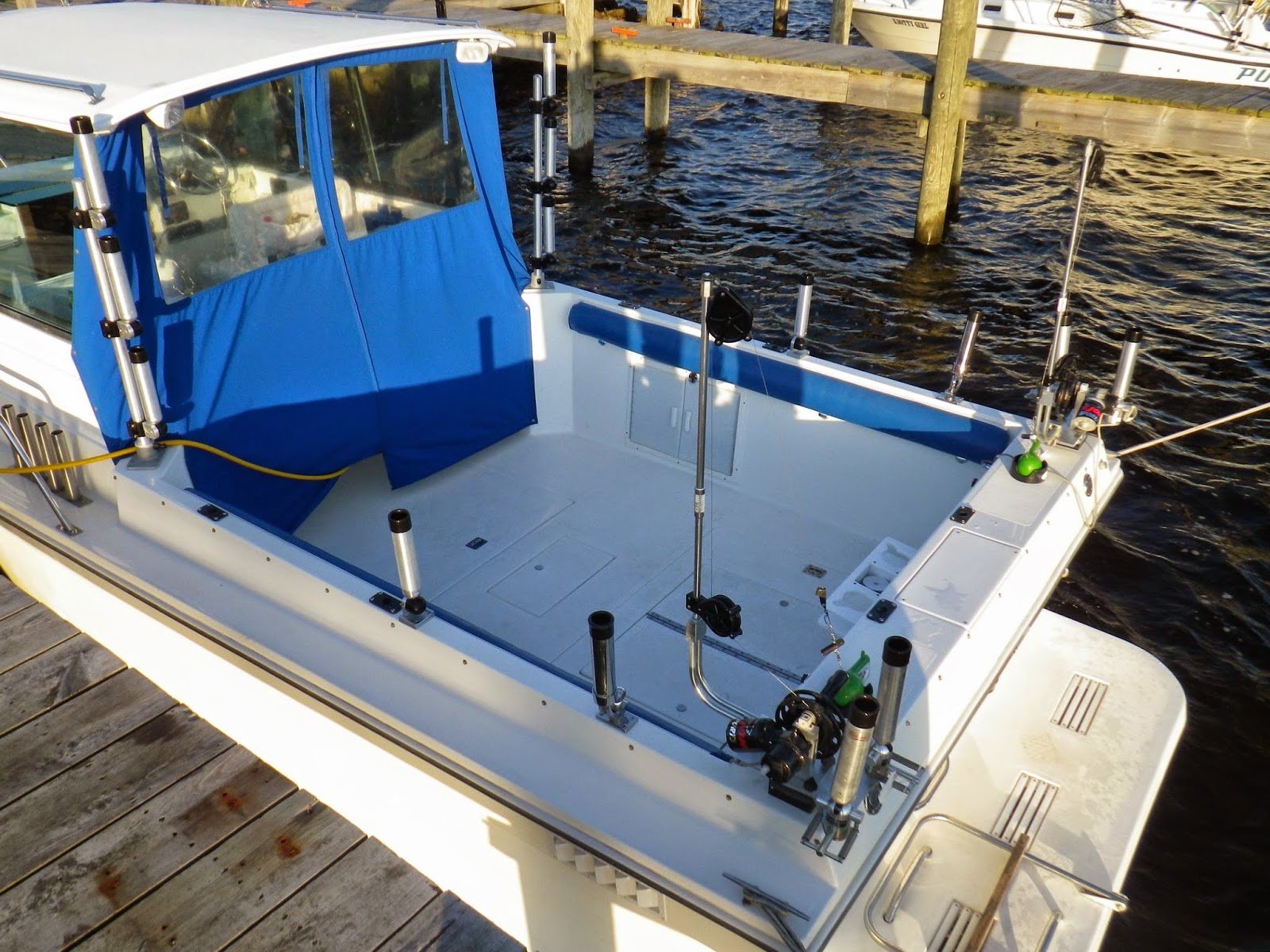 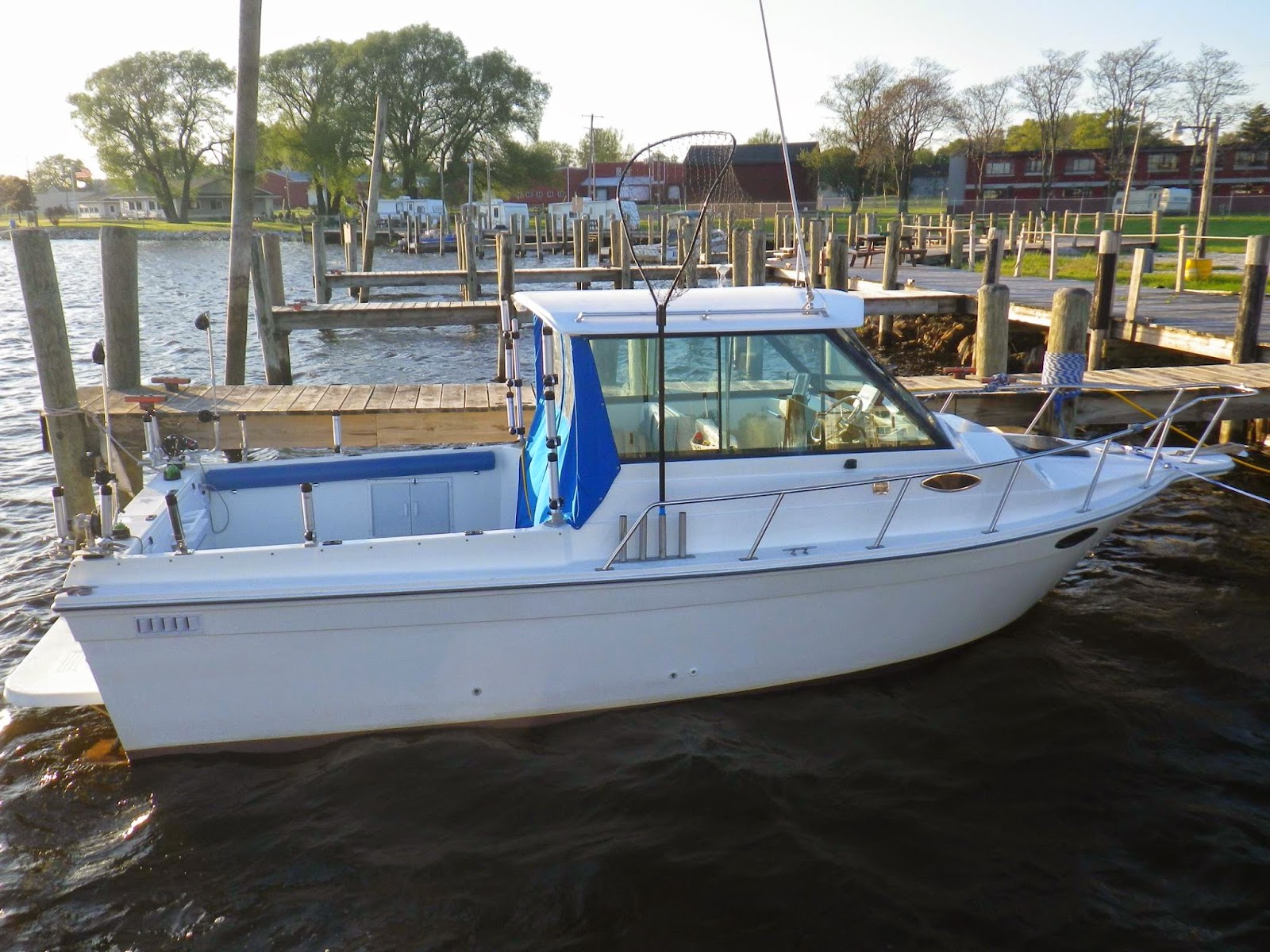 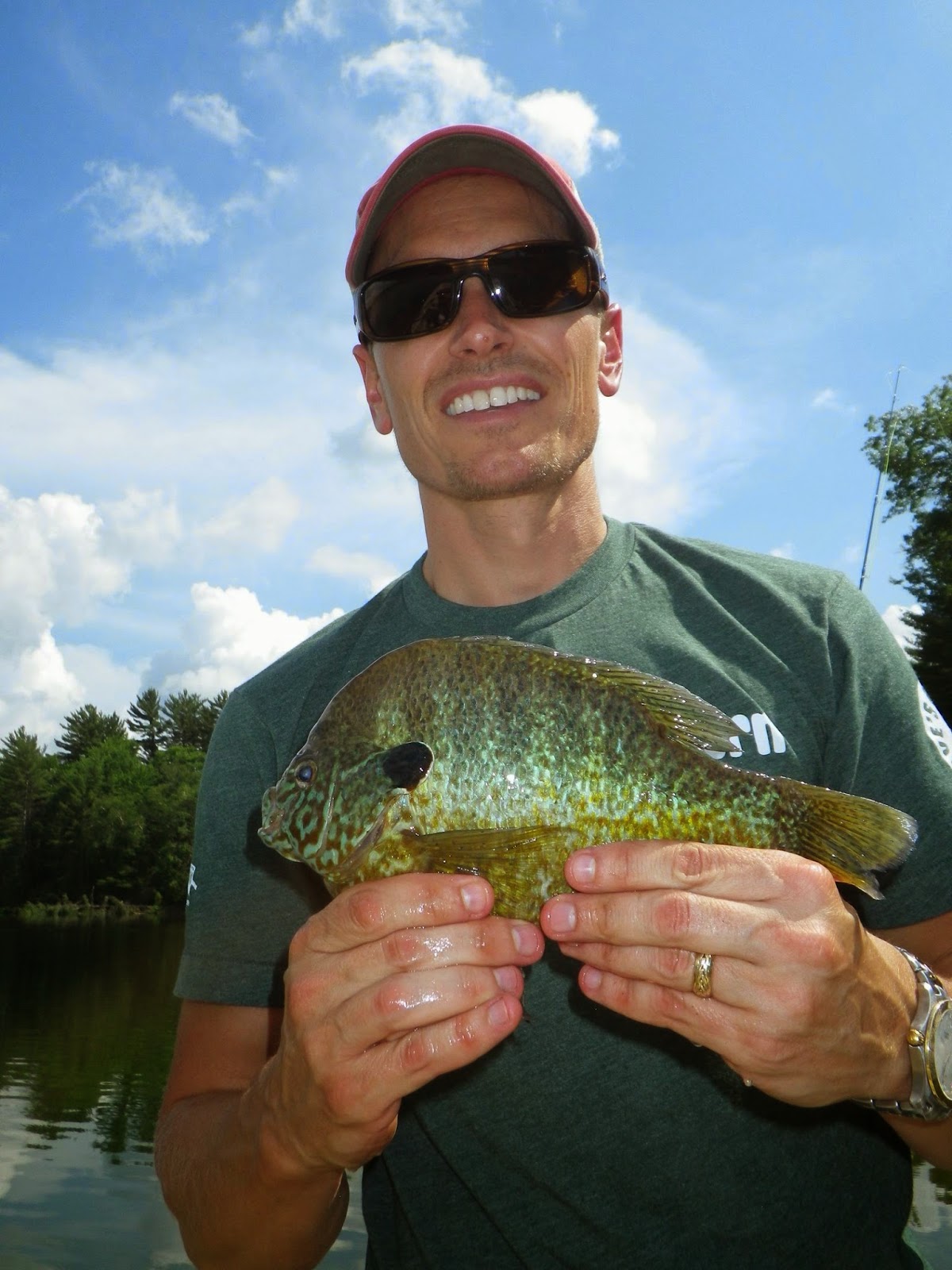 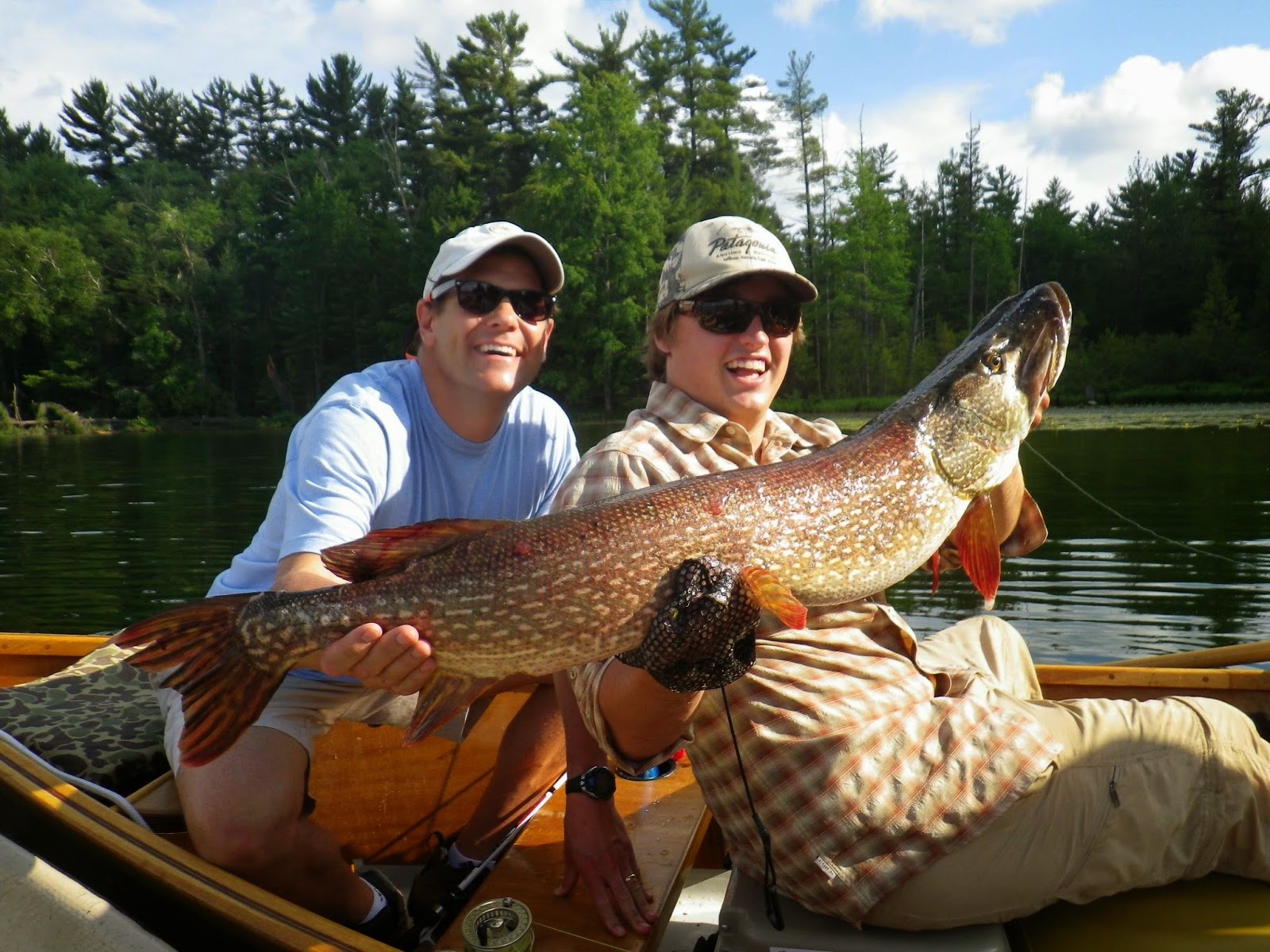 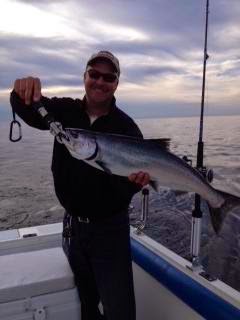 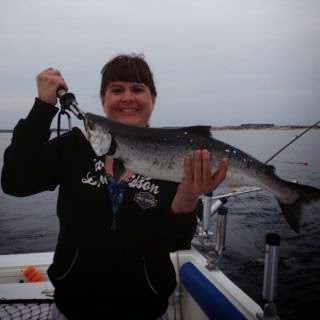 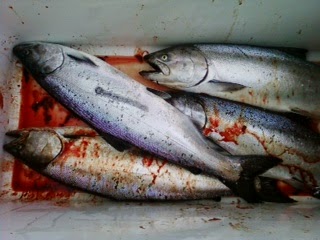 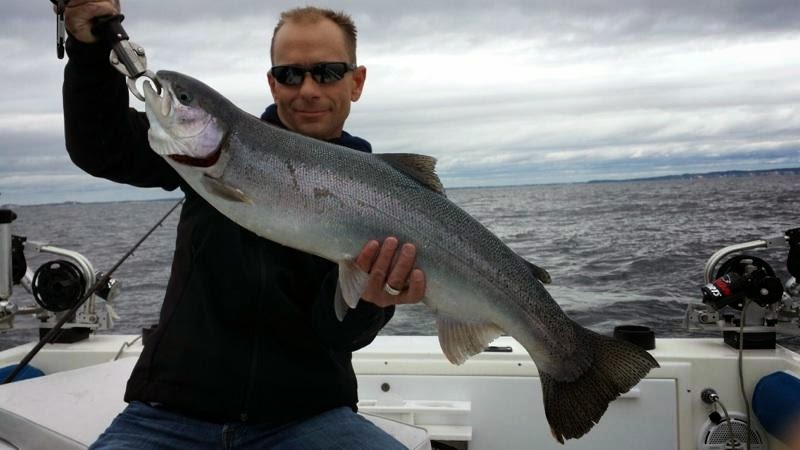 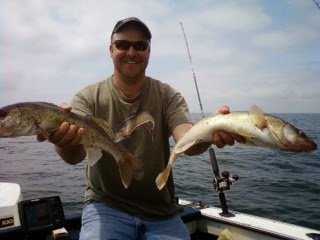 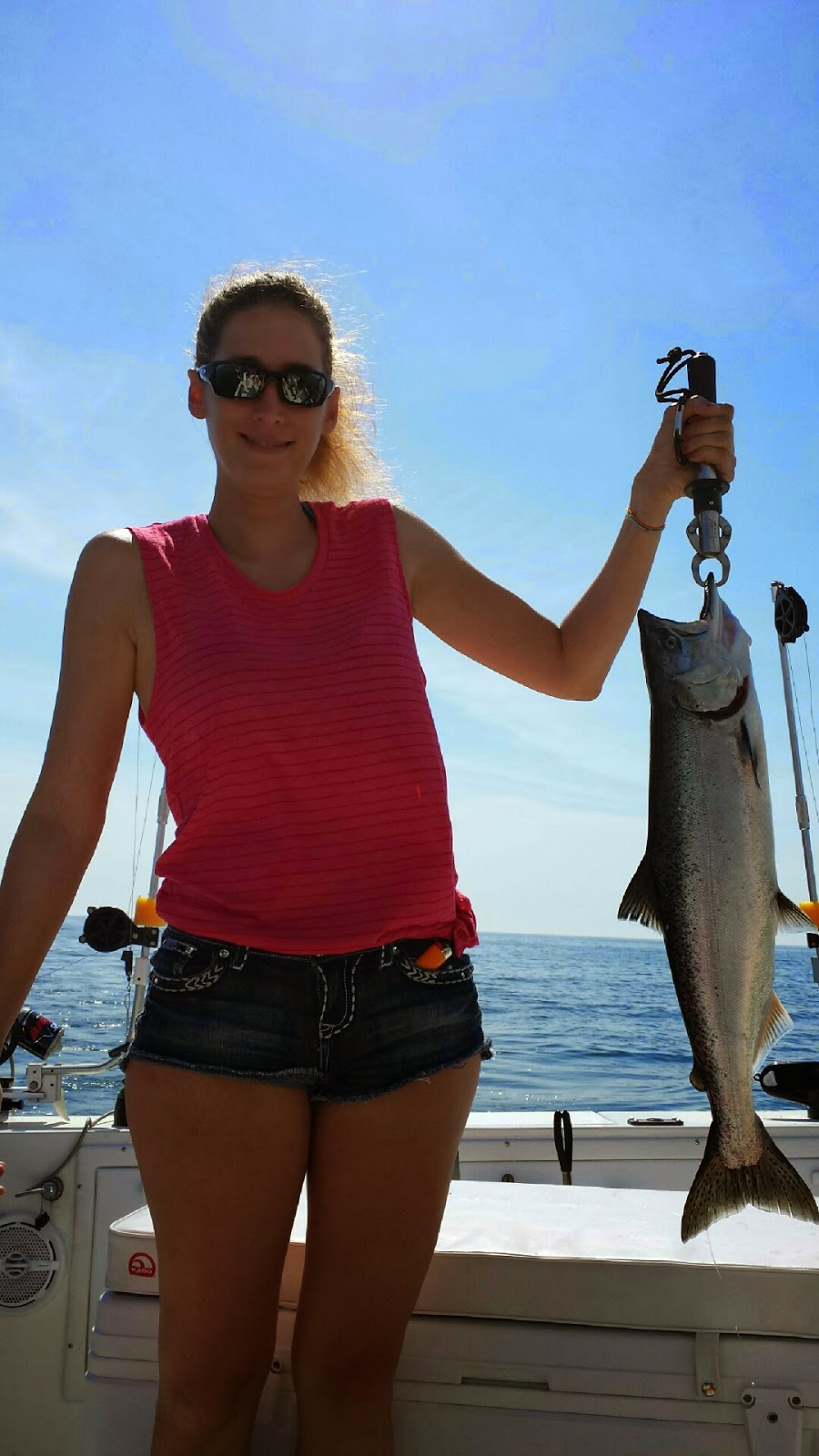 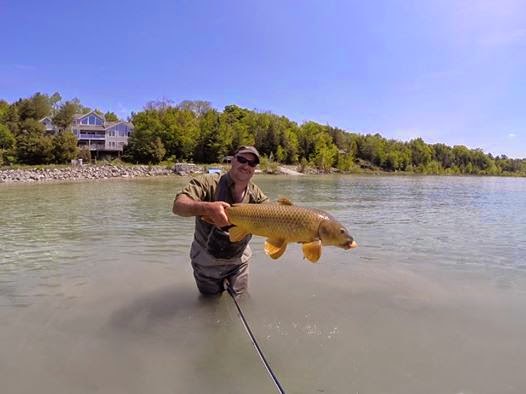 Posted by Unknown at 2:02 PM No comments: