I had another great visit to the East side of Detroit in St. Clare Shores..Thanks to Robert James and family for letting me hang out with your family. Robert is a old friend I worked with from Wallside Windows. I'll be celebrating my 10 year anniversary here at the Red Moose Lodge on October 15th. and also 10 year of getting out of that line of work. I also was hanging out with Tom and Brett another couple guys I worked with down there.

On Tuesday I met up with Tim and Nick ( father & son) a couple of client's I have been fishing with for many years. Tim is a avid Musky fishing guy. So when I asked him if he wanted to go it didn't take long to get a "yes" back. It sound's like he's in for next year as well. Tim and Nick are Cubs fans as well. So we went to a Tigers game vs Baltimore. A friend Brett met us at the park and joined us for the game. Tim and Nick were impressed with the stadium. It had many better features than there Cubs ball park, nice cup holders,big screan scoreboard and over all just a way nicer ballpark. The Tigers lost but that's life sometimes they win sometimes they loose..They lost the series against Baltimore and finally fired Valverdie, he has been a aweful closer as of late for the Tigers, good ridence..

On Wednesday I met up with my dad and Tim & Nick for our Musky trip. The fishing was slower than we would have liked but I had a feeling it would be. Last year it was hot and the water was way warmer and that in turn fires up top water action for the Muskys. The cooler water had them feeding down deep and a slower bite.The 3-4 days of East and North East winds NEVER help. North cools the water and East puts a back spin on it. Prevaling winds are West and South West are best winds for warmer water..

We landed 4 Musky so we all got our hands on one and we also landed 2 Smallies and a Walleye. Captain Craig and first mate Gary of Heatwave Charters did a great job but the bad fishing weather had us beat. Super sunny as well which is unusual for a NE and E wind those usually have a big Low pressure and bring a rain with them. It was a bueatiful 3 days to be out on the water not to choppy and sunny..

On Thursday and Friday I went out on Tom's new boat a 2003 18' Boston Whaler to do some fly casting. Tom and Robert stuck with what was working soft plastics on the bottom bounce. I kept whaling away with flies and lures and got a few Smallies but no Musky or Pike which is what I was throwing for. With all the wacky wind had the Smallies glued to the bottom 2 feet of the lake. I had some smallies come up and stare down my huge flies but wouldn't bite. It could have something to do with all the fish flies or "Hex Flies" on the water may have had the fish full of bugs. They had room for a smaller soft plastic in there face but not a big bait like I was hauling out there and stripping back..

On Thursday we went for a cruise on Roberts boat 28' X 10' Forumla to Detroit and back with his family. We made it just past the Canada Bridge and went back. I never knew how many marinas there were from St. Clare Shores to Detroit area, tons of boats down there. The marinas are all full of big boats and small. Maybe I'll try to make it down there again when the weather looks better and the fish flies are all gone and the winds look favorable. I'll go down and fish with Tom and Robert again in July.

For now it's back to a busy lodge and lots of travlers coming up North enjoying there summer vacations in the Baldwin area. Canoe, Kayaking, Atv's and Dirt Bikes are some activities being enjoyed..As for the Trout fishing the Hex hatch is starting and big fish are eating right off the surface at night. Grey Drakes are also getting eaten right before dark as well..Mouse flies are producing almost every night skating a big fly that makes a wake or a gurgle noise produces big fish in the dark..During the day nymphing and dries catch little to medium size Trout with the occasional nice one during the day. The bigger fish are definitly favoring the evening and dark shift.

Till Next Time
Tight Lines
Clint 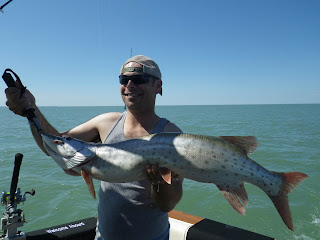 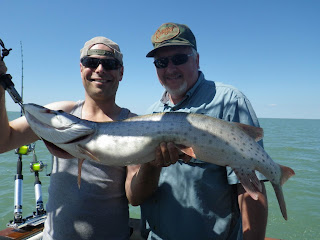 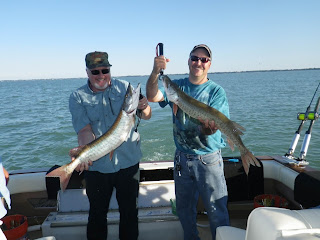 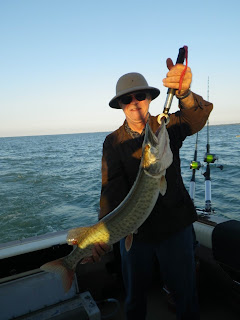 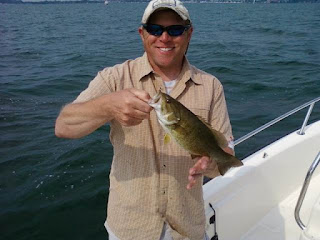 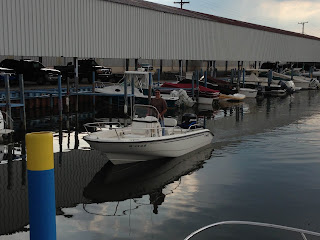 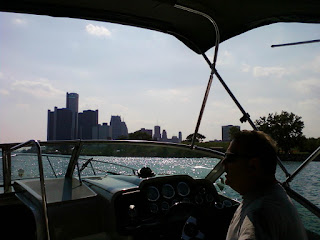 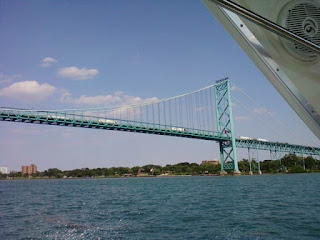 Been just hanging out around here doing some dirt biking, a little Trout fishing. Went over to Saginaw Bay to fish Walleye with my friends John Robinson, Brad Duptner and Tom and we cleaned there clocks. Hands down the best Walleye fishing in the state. First night was a shake down and we hit 14 keepers and one throw back..The next a.m. we started at 8:30 setting lines and had a 4 man limit of 20 keepers by 1 p.m. and threw back 16+ fish and had a bunch of other hookups of missing or half chewed worms..Only one off species, 6 lb. catfish was caught. no Sheepheads,Bass,Pike or Perch...We'll have to make it back over there..Whata fishery 2 hours away..

The rest of this week is down state Detroit area Musky fishing and a Tiger game vs Baltimore on Tuesday..Musky fishing I'm going out trolling with Heatwave Charters and then 2 days of throwing BIG flies Eli Berant of Great Lakes Fly tied up for me for Musky and Pike..Can't wait to try his flies..Wish me luck..I'll post next week some Musky pictures from LSC.. 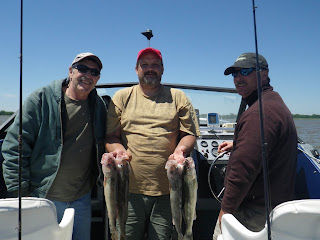 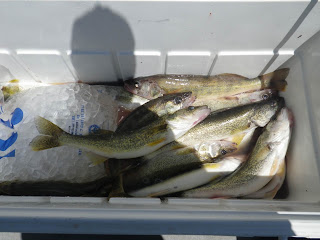