We have been getting clobbered with snow.. Last Friday it started and by this Friday we have had over 20" fall. Most of it fell last weekend and then we have had a bunch of small storms all week. I finally broke down and called in the Backhoe. Ran out of places to put it and needed to make room for parking and the remainder of the season. Spent all day digging out paths, hot tub, plowing the driveway excavation in general. Looks like I declared war on snow at the end of the day. That Backhoe turned mountains out of molehills..Dug out and ready for business..

Went Perch fishing on Hardy Pond this week, it was slow. Heading over to the west side tomorrow a.m. to Perch fish. Decided to stay home this weekend while my friends went up to the U.P. for another ride. Figured we have over 2' on the ground why drive up there. I went out for a ride with Jeff Hubbard this Wednesday and the snow is major deep for the Baldwin area. We have more now than any of the 10 years I've been living here running the lodge. The groomed trails were great on Wednesday, like Highways..Off trail riding, the Indy 500 carb had a little trouble with the deep snow and my 136" 600 shift almost got stuck but managed to paddle out of trouble a couple times.

Haven't wet a line for Steelhead in over 2 weeks. We have been dealing with cold temps and lots of snow. So you just run with it and snowmobile and ice fish while the cold weather prevails. We took a few pictures while riding around with Jeff. Gleasons Landing is locked up tight to the Don King hole and has a ice jam backing water up the boat launch, it's a mess. Rainbow to Upper Branch is open, as it is the fastest section on the P.M... Rainbow Rapids is plowed out good. Sulak is plowed the best I've ever seen, all the way down the hill to the boat ramp from the State DNR guy.  He has been doing a GREAT job at M-37 this year as well. Upper Branch has been plowed but not seance last Friday or Saturday. There was over a foot of snow in that lot Wednesday afternoon. The Pic. is Gleasons, Rainbow then Sulak " you"ll need a rope" didn't take a shot of Upper Branch.. 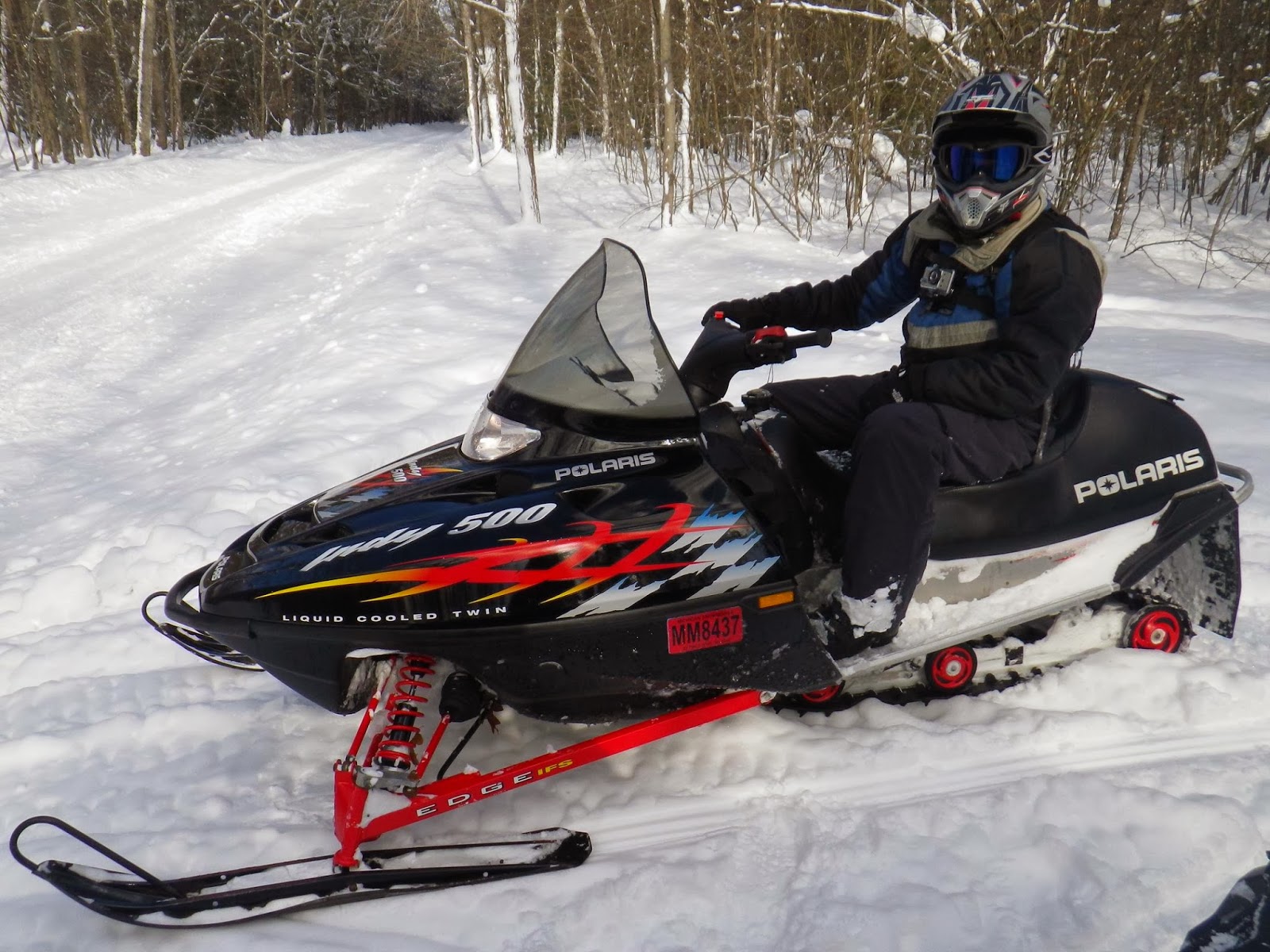 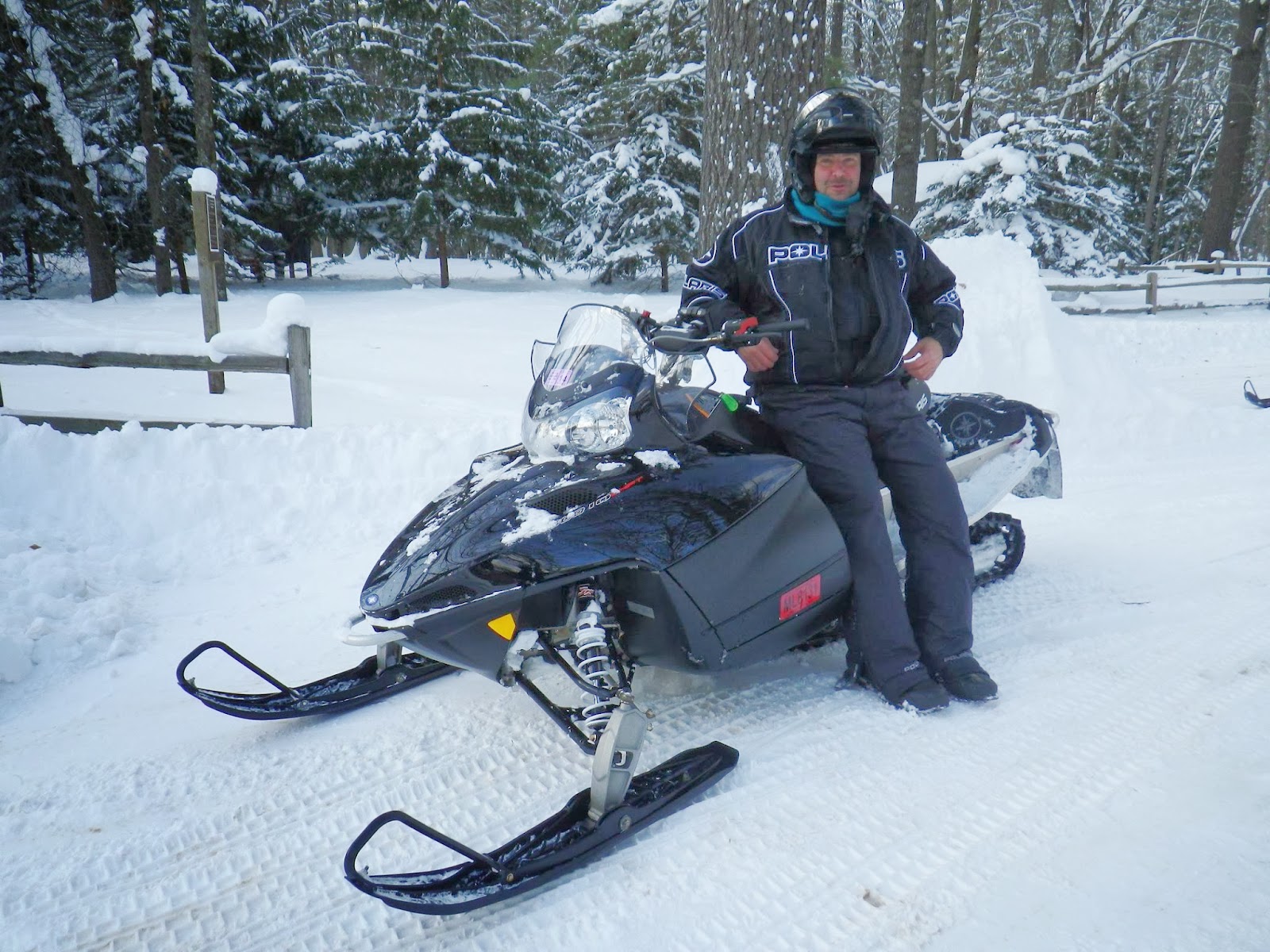 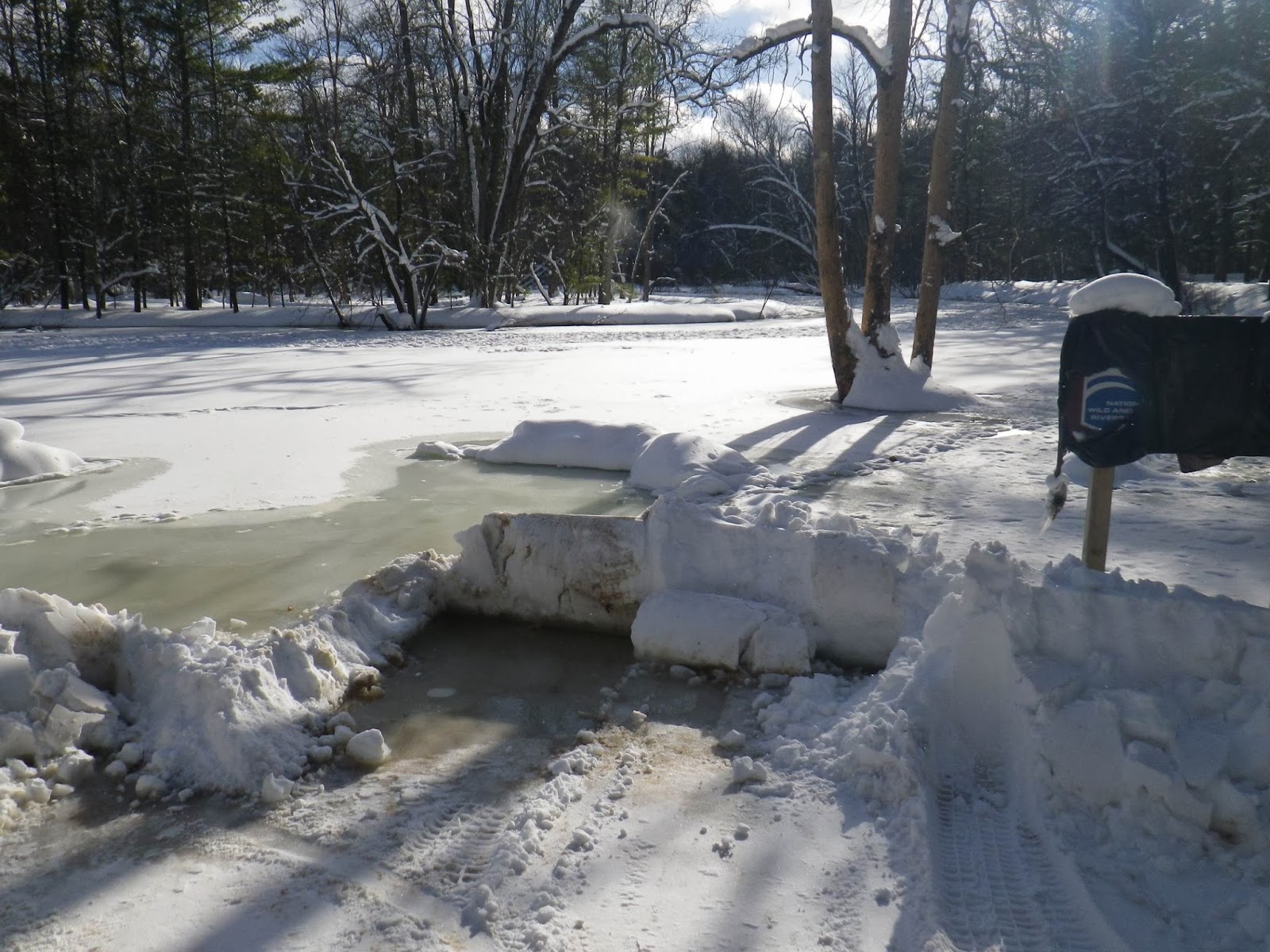 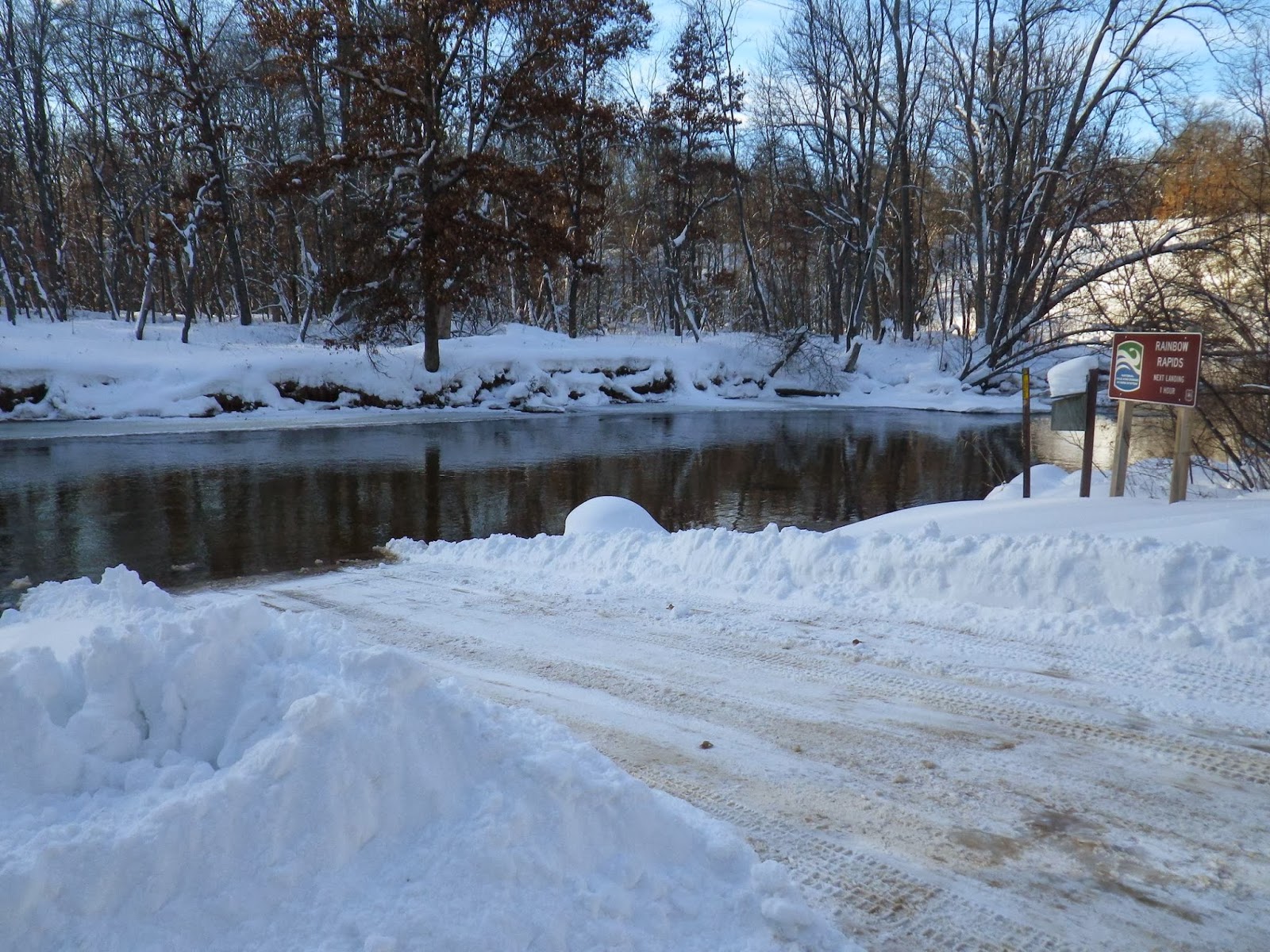 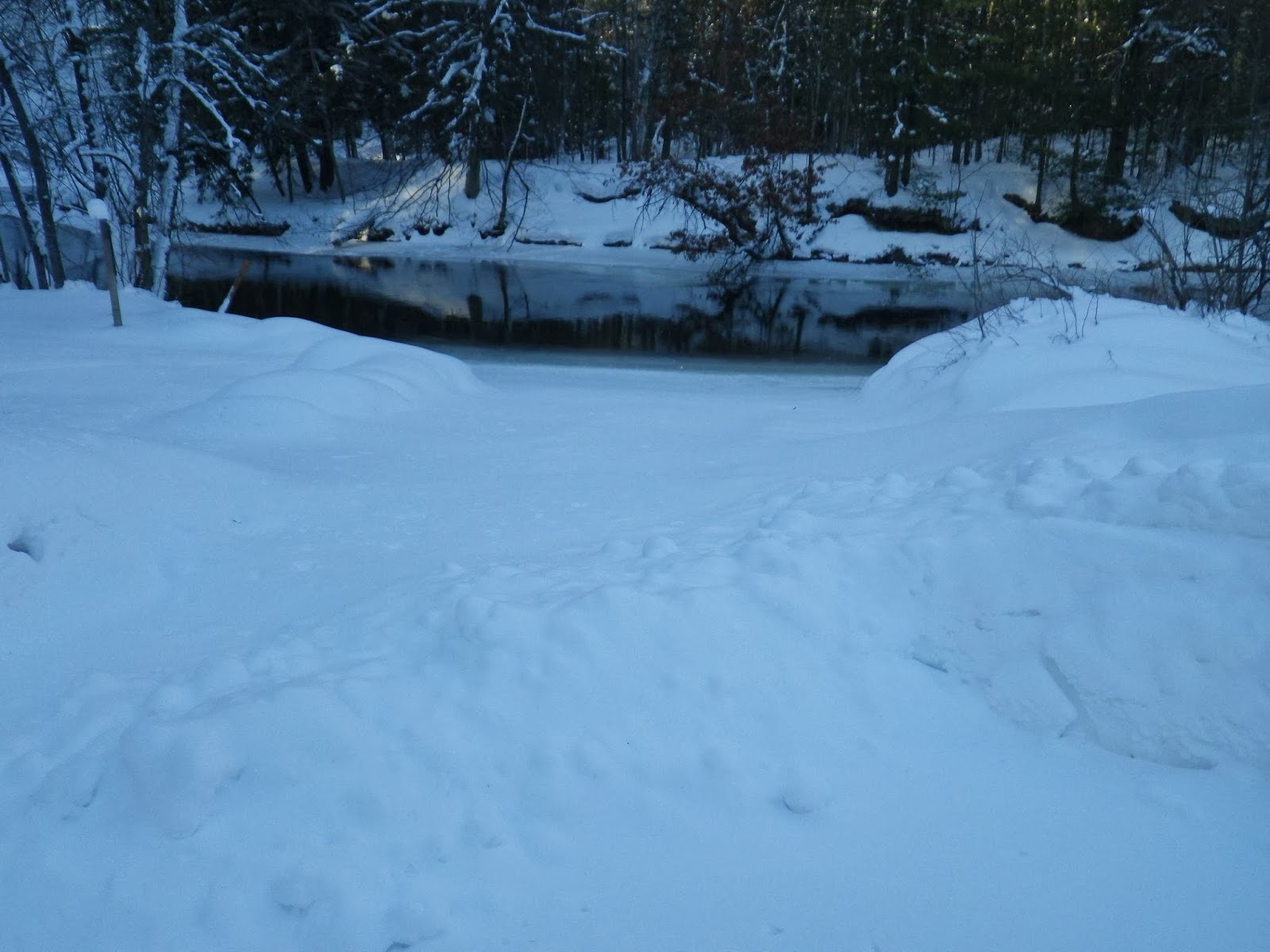 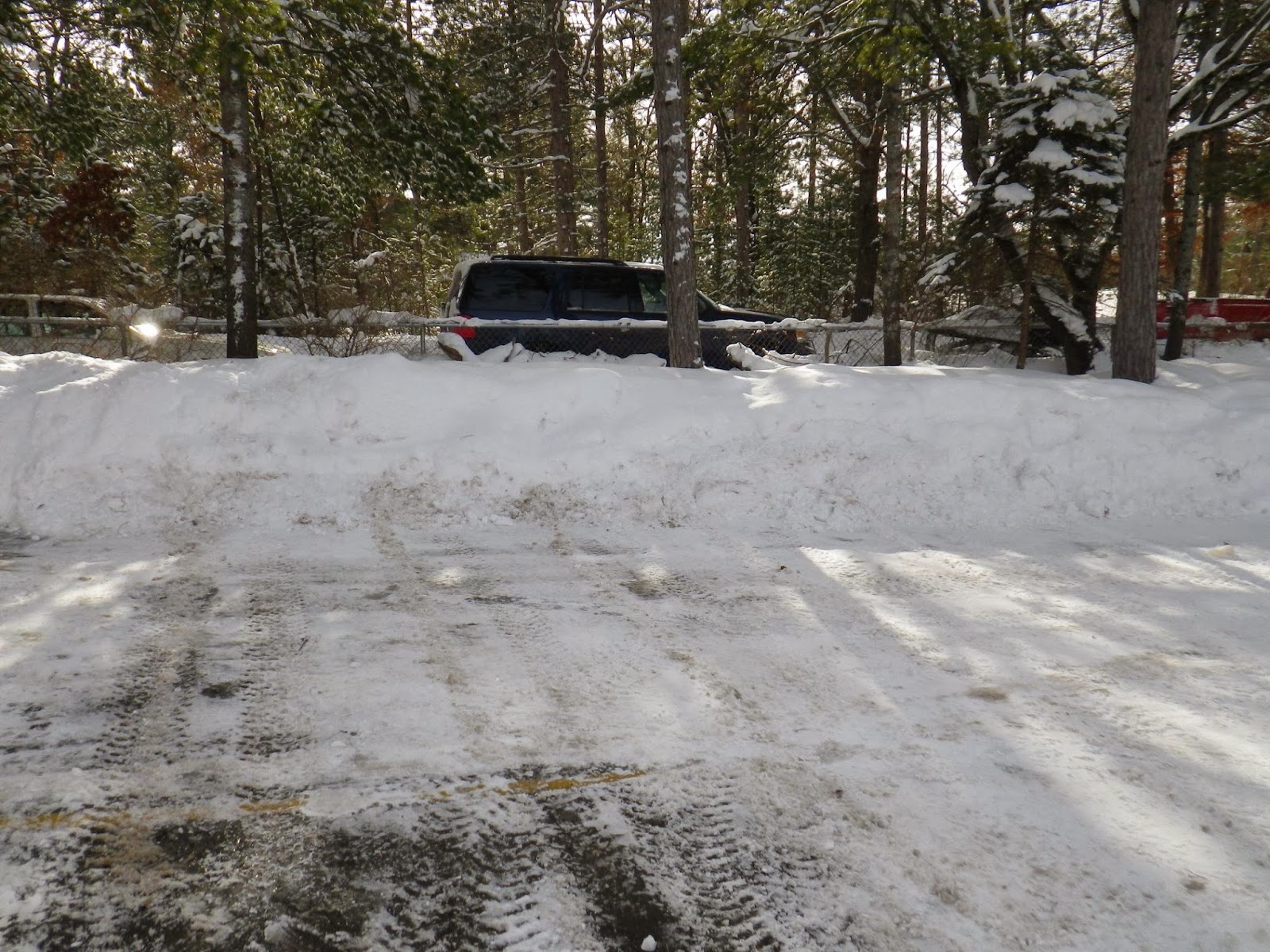 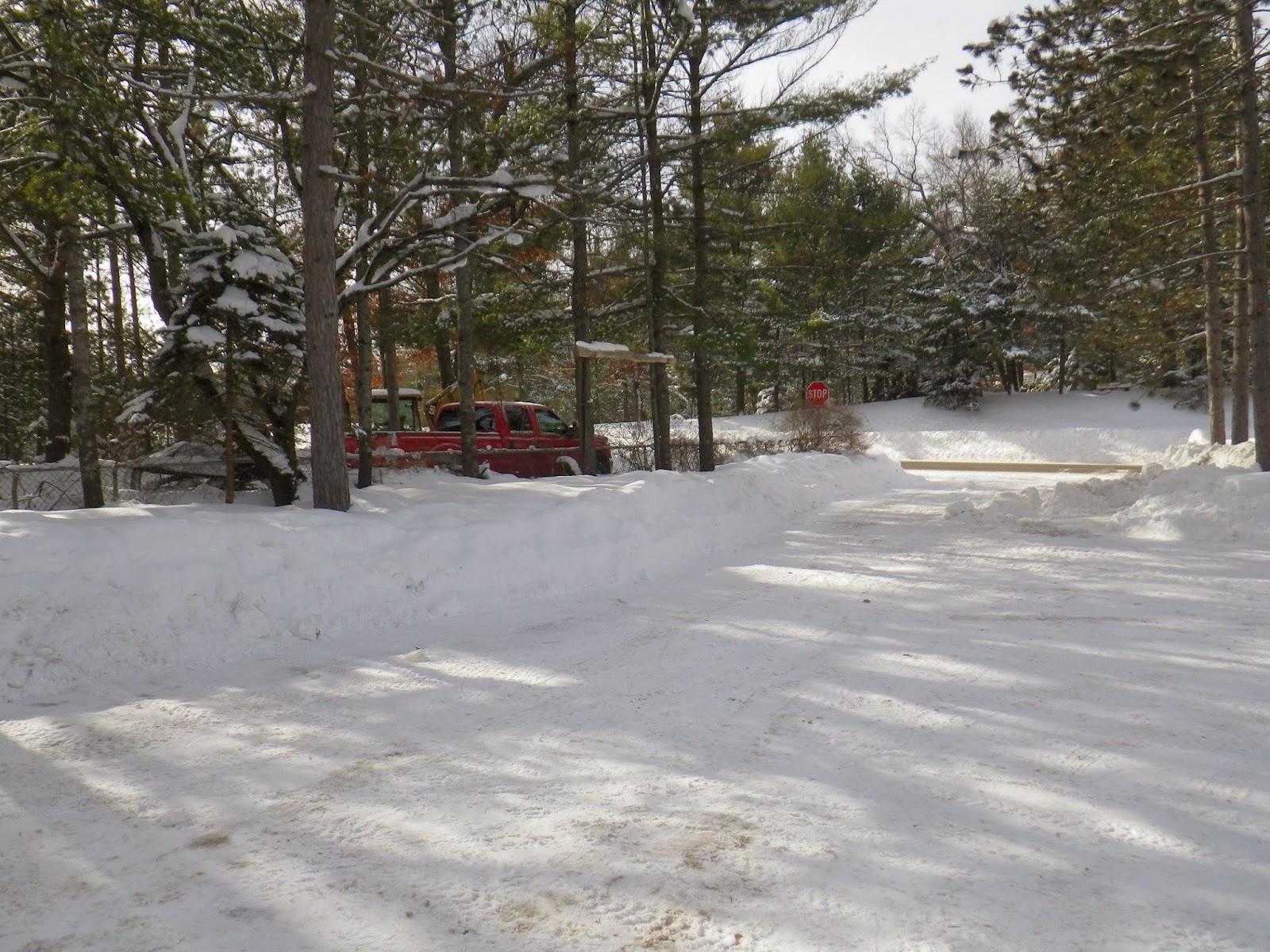 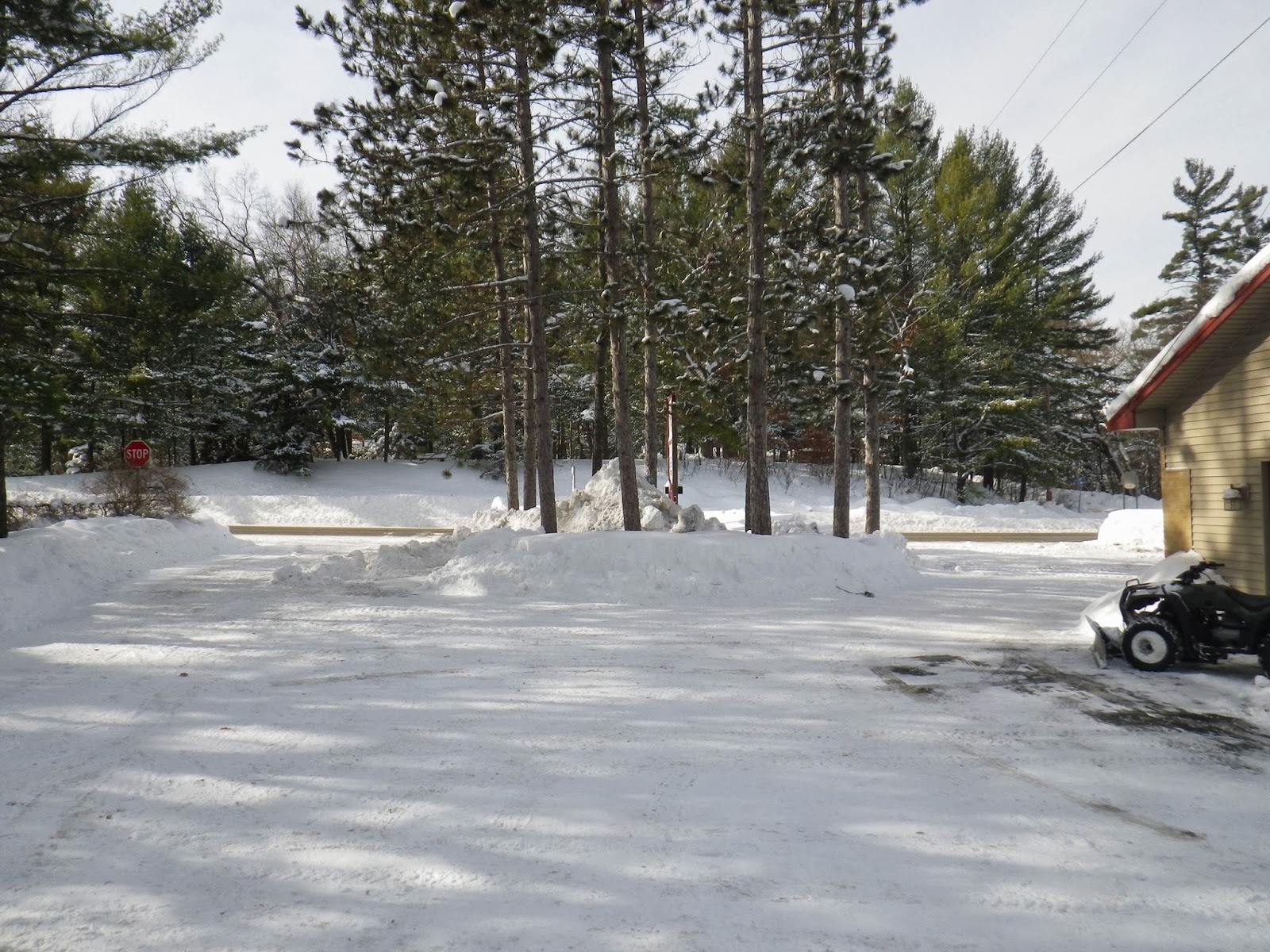 Just got home a couple days ago. All I can say is the Keweenaw Peninsula in the U.P. of Michigan has a snow problem. No Place to put it all. In Houghton the banks were around 3' and the banks on Calumet were 6' and strait up. They were shaving and blowing snow over the top making walls of snow.Also keep in mind it is only January 17th--20th.... They will continue to get snow thru the end of April..

The deep powder riding was great some areas were 4' other areas we rode the snow was 6 feet +.. The groomed trail were perfect all but once or twice the groomed trail #3 got a little bumpy at the end of the day going into Calumet were we stayed but every morning it was perfect leaving. The groomed trail towards Gay, Mohawk, and Copper Harbor were in perfect condition. I've never rode better groomed trails EVER..

Here is a few stuck pictures of Brett and one of Ryan doing some carving and got a little carried away..Snow is always to the belly pan or over the hood. We walked into a gas stop and all of us were head to toe snow balls. That powder gets everywhere like sand at the beach. The cashier was like where have you guys been riding. Keep in mind we all have 136" paddle tracks I wouldn't recommend going off trail with a 121" in the Keweenaw. Just stay on the groomed trails with standard 121" tracks. Saw a few guys with 144" Skidoo Summits and Polaris RMK. I get around with a 600/ 136 IQ Shift and my other 2 friends I ride with have 600 and 800 Skidoo Renegade Backcountrys. Sorry no pictures of me stuck those are on there cameras. I get stuck plenty. It's not to bad if we take turns getting stuck one at a time. But if 2 or 3 of us get stuck all at once, that sucks..

Snowmobiling is good around here. We have around 15" to 18" with a good base and fresh powder on top..It's as good as it gets for the lower Michigan !!! So why do I have 4 rooms open for the weekend beats the hell out of me..My only guess is the groomed trail is 3 miles to far away. Everyone wants to be right on the trail or less than a mile from it..

Ice fishing has been good. We have 8" to 11" on most lakes now. I have been on local small lakes and have been to some big water like Higgins, Hamlin and Pentwater Lakes.. Haven't been on P.M. Lake yet but will have to try there soon.. Have caught pan fish mostly Perch, Blue Gills, Crappy, and the occasional Bass or Pike. Sean Mc Donald and I were fishen Perch in the Perch Shack where we kept about 30 keepers and put back 15 or 20, some solid Perch fishen. Thanks for the invite Sean..

Steelhead fishing has been hit or miss. The last report I had from a guide out last Thursday he had a good outing. The last couple time I was out walking in with friends it was a tough bite with decent to good fishing conditions. You just have to try. The fish are there it's just getting them to bite.. 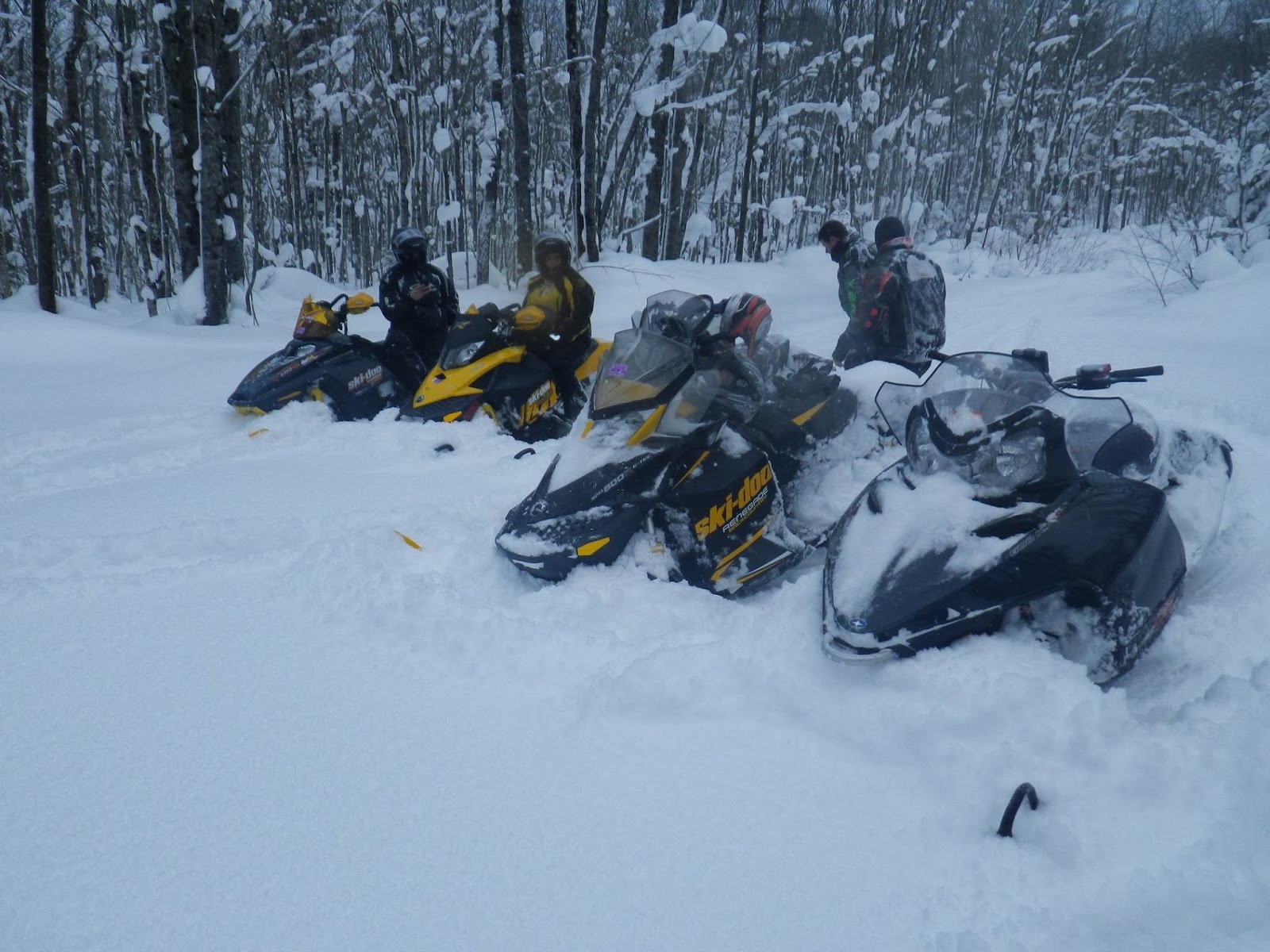 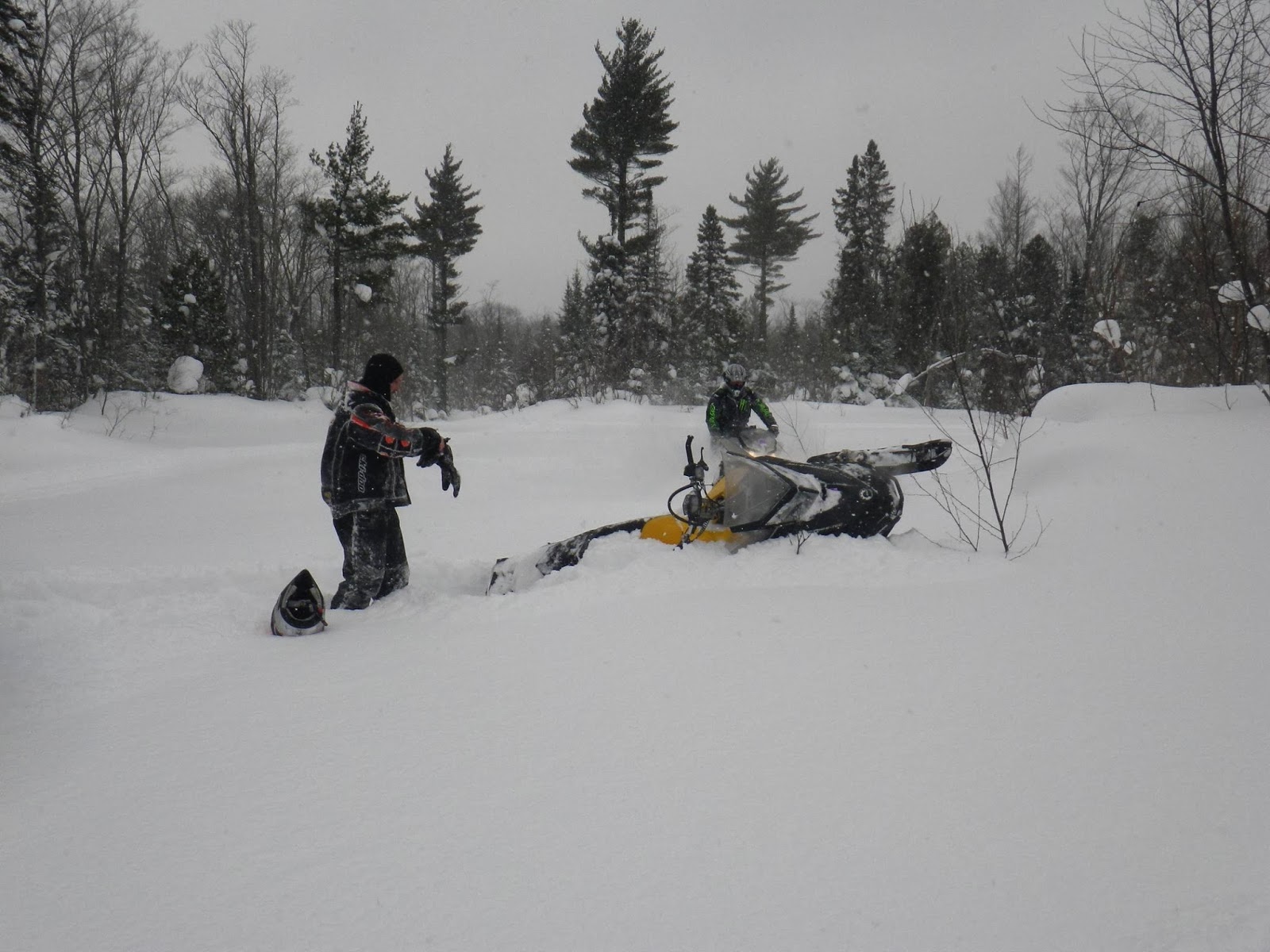 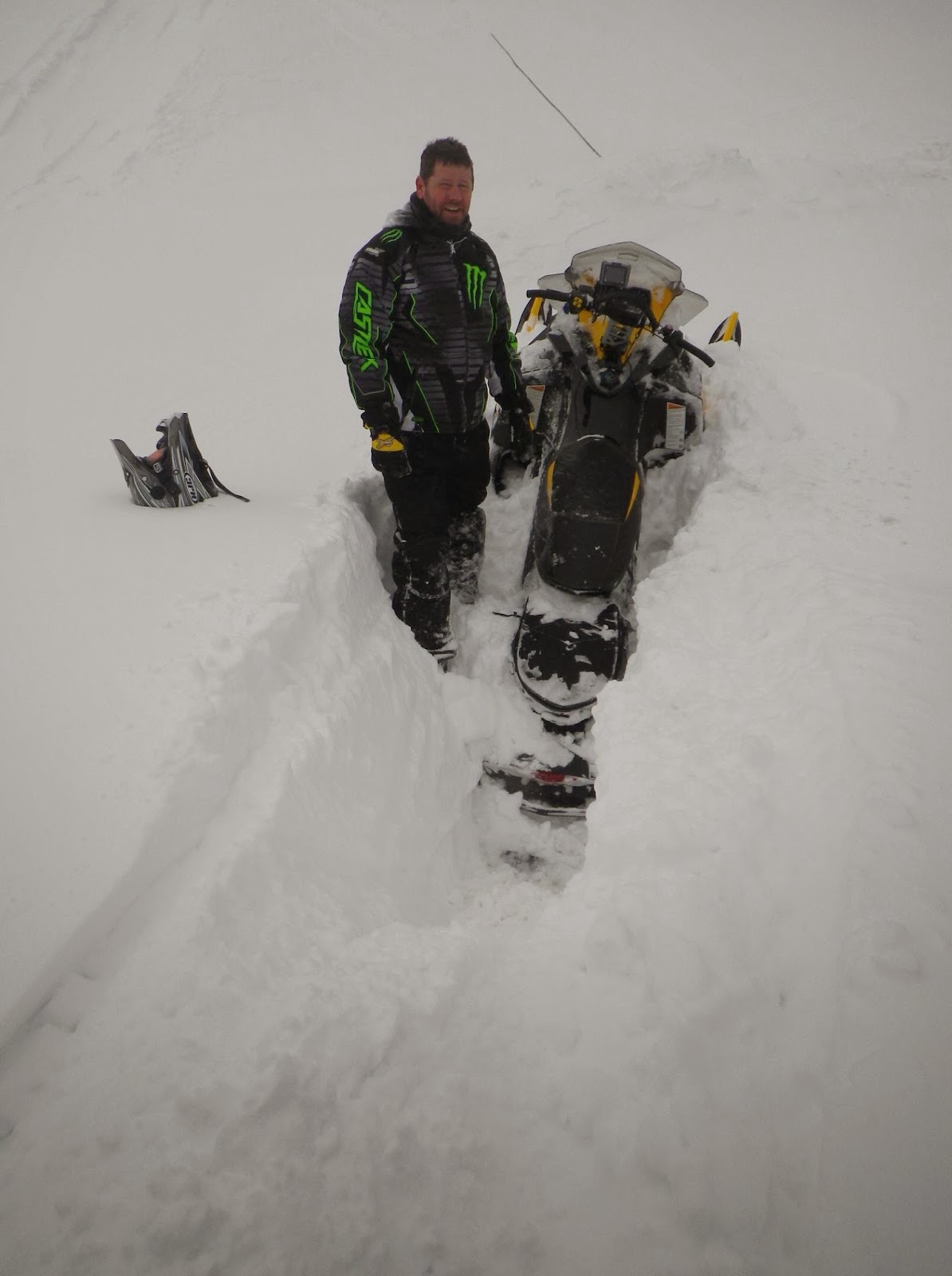 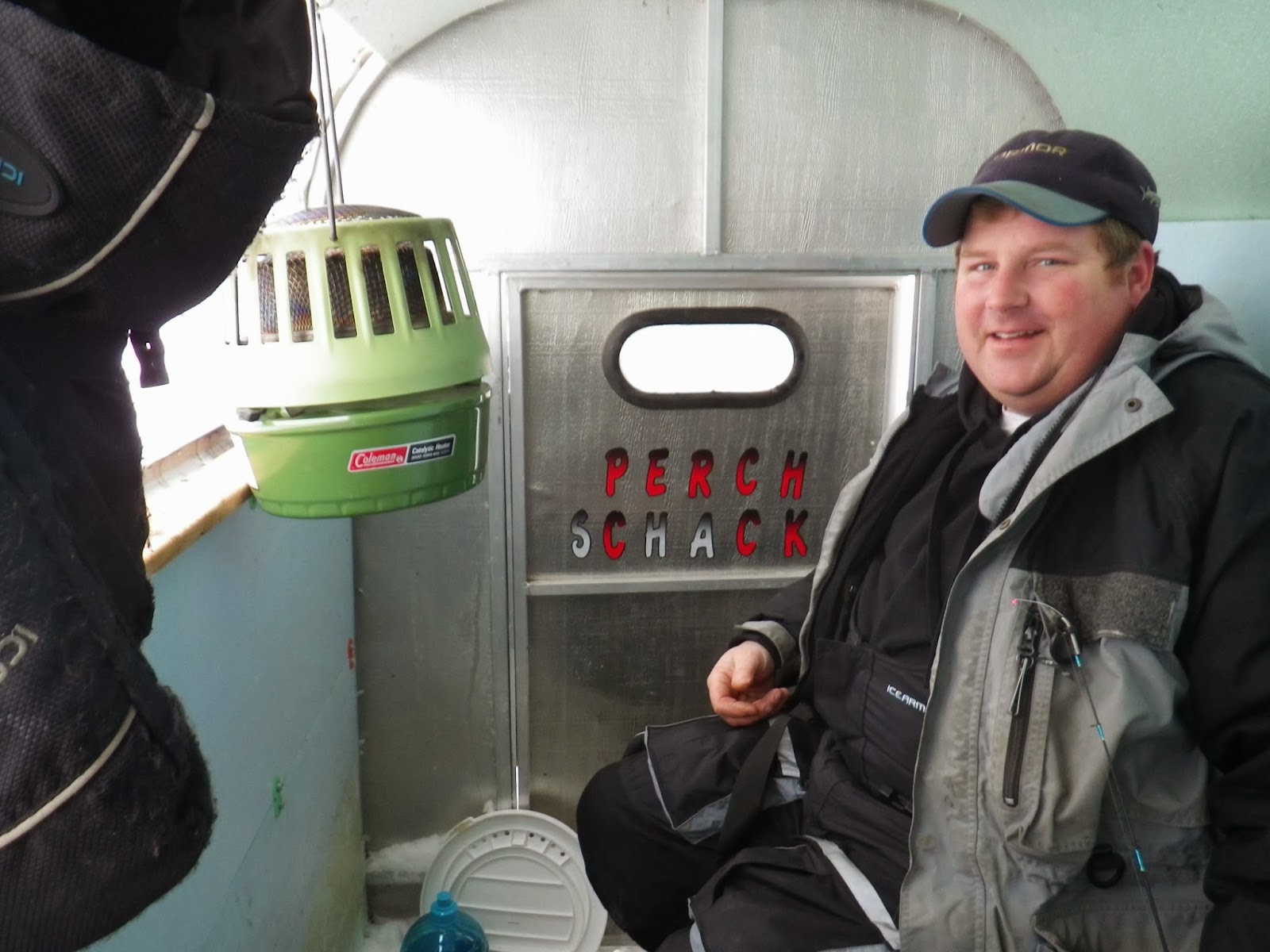 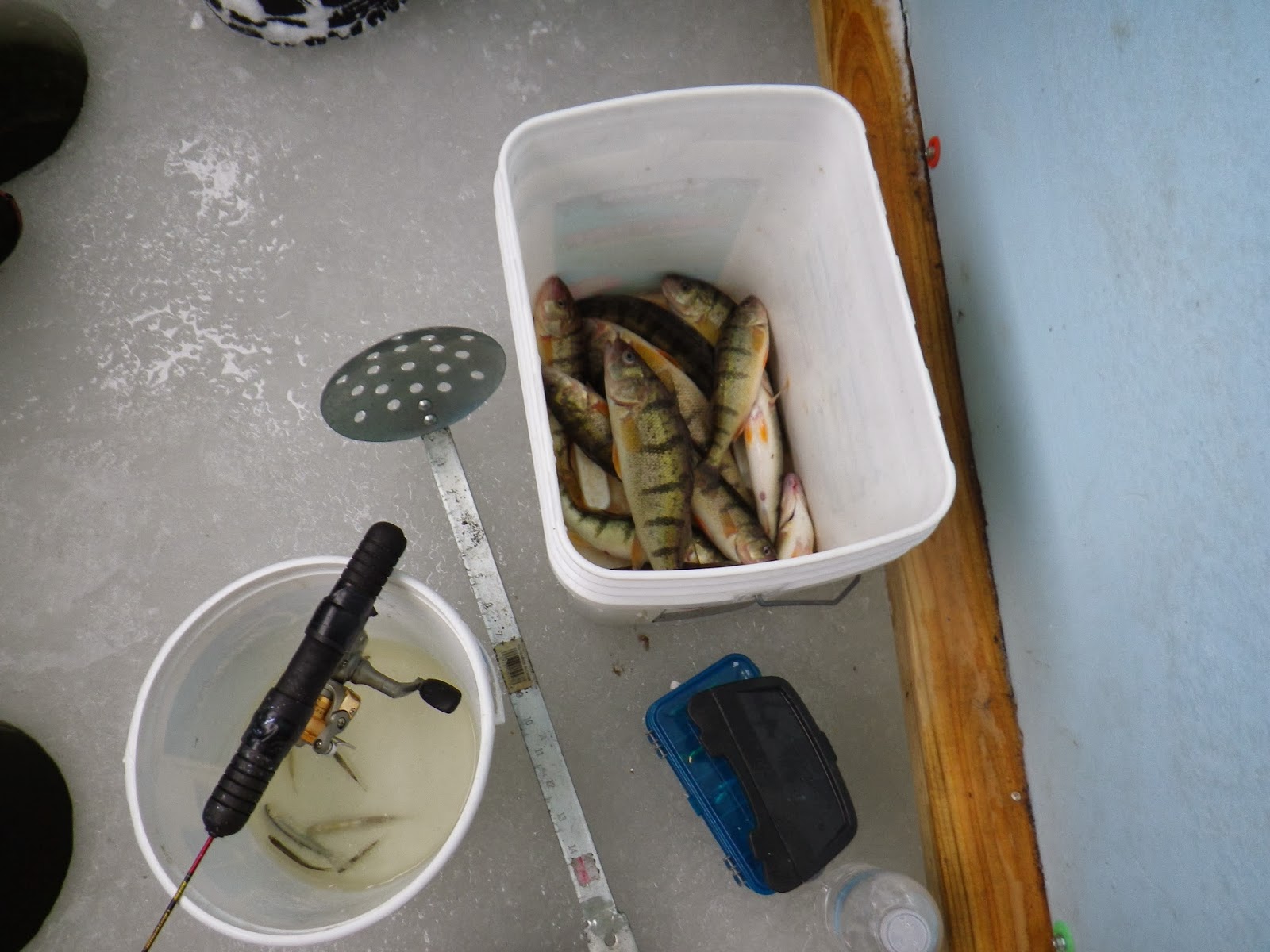 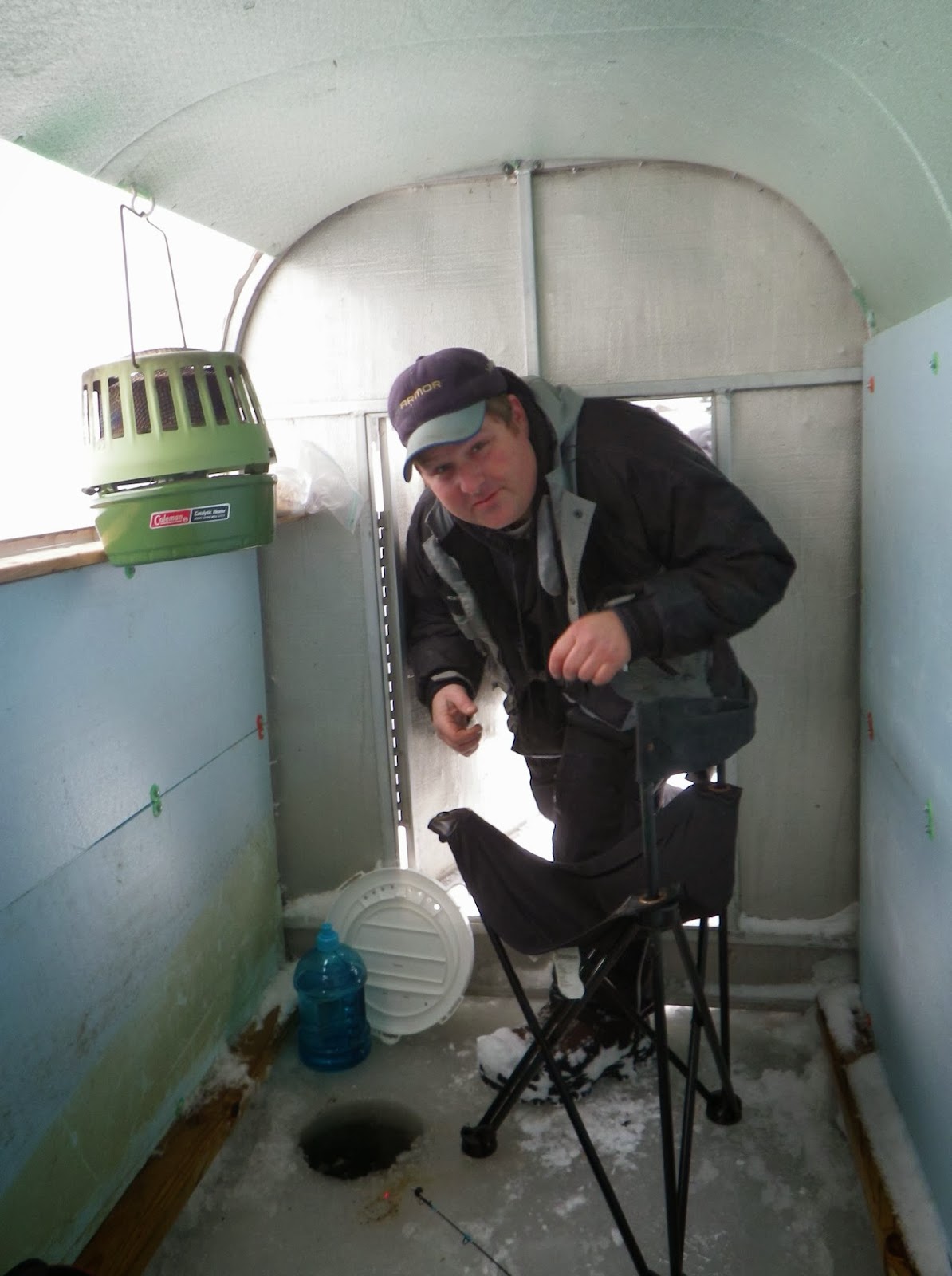 Have A Great Winter !!
Clint

Not a lot new going on around here. Tommy Lynch is having a nice Steelhead School here this weekend. They seam to be having a great time. The weather is helping out with this nice little thaw were having, opening up the river bank to bank up here in the upper river ridding us of shelf ice and anchor ice "for the moment". They should do well when they hit the river for some casting time also the ice in the guides should be at a minimal today and tommrow too..

I may actually have to get out and Steelhead fish some this week before we freeze up again..Went ice fishing localy with friends John Robinson and Jeff Hubbard yesterday.. We got 10 perch, 2 gills and 2 crappy not a huge haul but enough for dinner and some fun..After this thaw the next freeze should make the ice real thick. Yesterday we were all good for ice 6"-8" everywhere we drilled. GOOD ICE around here..

Next weekend is a big Dog Sled Race up here. We have a few Mushers/ sled dogs staying with us next weekend. I'm going back up to the U.P for some more snowmobiling next weekend to Copper Harbor and Calumet area..I was up to Munising just before the New Years holiday and put on a few miles. The snow was 2.5'-3' a couple weeks ago. Hope they get a bunch of new fluffy snow this week because I'm sure they based up this weekend as well even up there..

I'm Open to fish if anyone intrested in Ice Fishing or Steelheading here this winter. Both are doing good and beat the heck out of sitting in the house going crazy..

Tight Lines
Clint
Posted by Unknown at 11:16 AM No comments: Links to this post