Been Hunting and Fishing Fool

It's cold up here 7 deg. this a.m.. Winter is here ! We have had about 15"-20" of snowfall. Most of it melted last week in a 50 deg. warm up. When I got home there was still some crusty banks and a dusting on the driveway.I'll bet we have plowed 6- 8 times since Nov. 20th. More snow is on the way tonight and we have flurries going on now. 5" of super fluffy stuff is on the ground now and another 4"-6" is predicted overnight.

My Steelhead trips thru November and December were good when I was home. I missed a lot of good fishing while in Missouri bow hunting Deer for 2 weeks. I got a buck a decent 9 pt at 30 yds. with my bow.. The Deer numbers were down really bad this year. The Deer had a second summer where it was hot and dry and as a result EHD or ( blue tong) reared it's ugly head. Last season there were a few less Deer but we had a pretty good hunt all and all. This season SUCKED my Deer sightings were down 60-70%..

I hunt 3 or 4 different farms and all were the same and so were the farms my friends were hunting. Trail camera photo's were down too. My cousin had a family of 10 doe's coming into his green field last season everyday..This season it's the same 3 or 4 doe's coming in everyday. Big bucks took a hit also, very few of them survived. A sickness like EHD affects the young and old the hardest. There was a few medium size bucks left and a few doe's left but I never laid eyes on a giant buck in 2 weeks of hunting hard.

6 guys total hunted. I bow hunted for 2 weeks and 5 other guys went down for 1 week of bow and 1 week of firearm. All in all our group killed 5 bucks, 2 doe's, and 1 wild turkey. 2 Bucks were killed with a gun the rest was with bows and crossbows. Everyone killed something or had shots but the big buck sightings were way down and so was the overall sightings and opportunities. It can only get better next year, but I'm thinking it's going to take 3 to 5 years to get back to normal good/ great hunting again..

Steelhead fishing this past weekend was good. There was a good bite both Saturday and Sunday. It was mostly on eggs. Even saw a  zombie Salmon or 2 floating around. Probably why eggs were good. Had only 1 or 2 fish on the nymphs. One of the 2 days we hooked into 10. Most of the bite was afternoon. So getting out and being the first guy wasn't a factor at all..The 4 guys were cold but they made it and were glad they came up for some solid days of Winter Steelheading on the Pere Marquette River..

That's all for now. I need to put away my hunting stuff, clean the basement and barn and get ready for snowmobiling and ice fishing. Some lakes are already reporting 3"-5" of good ice. Still be careful for the next week or so and I wouldn't try snowmobiling on any of the lakes yet.They just barely have enough to walk on. 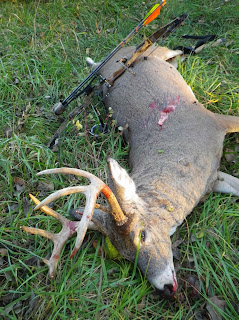 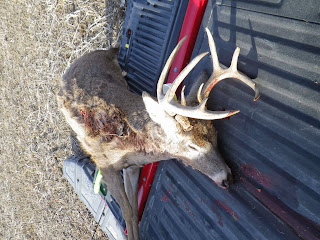 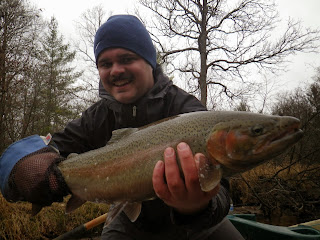 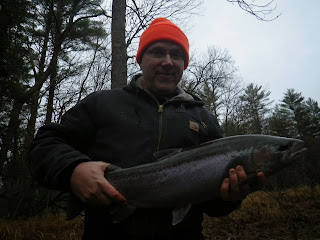 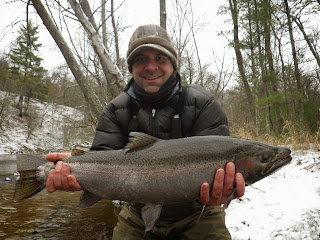 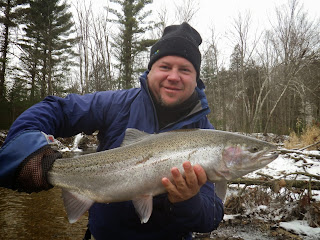 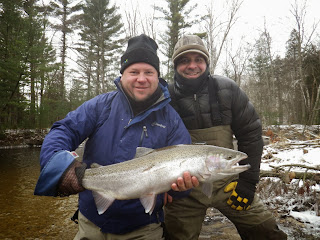 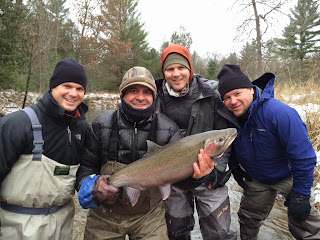